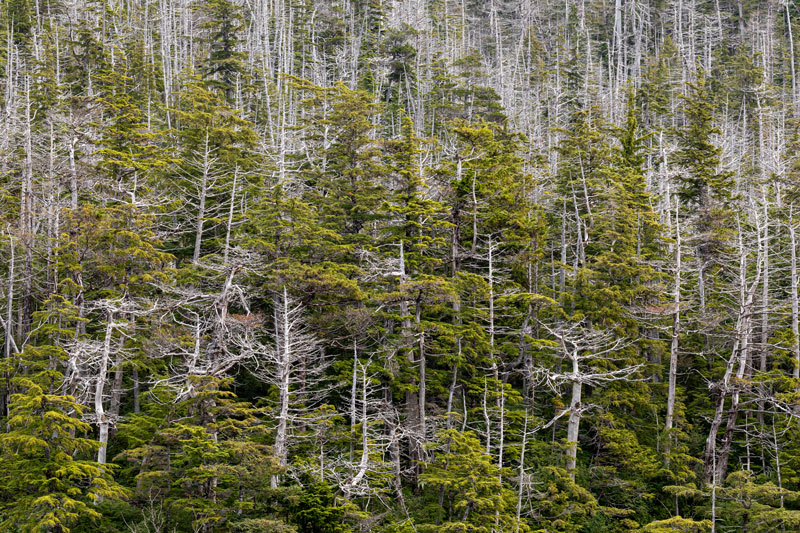 General: The yellowish or bluish-green leaves are scale-like with sharp pointed spreading tips. If you stroke the branchlets the wrong way, they are very prickly. The cones begin as round, bumpy, whitish-green berries. They ripen to brown, woody cones with 4 to 6 mushroom-shaped scales with a point in the top center of each scale. The grayish-brown, shaggy bark can be peeled off in long, vertical strips. When you expose the yellowish, inner bark, it smells like raw potatoes. The wood is a bright yellow.

Spherical about 1/2 inch in diameter;

Green, maturing to brown in 2 years;

Made of 4-6 shield-shaped scales, sharp central point on each scale, scales do not overlap.

Shrub-sized and contorted in bogs and at tree line;

From Oregon north along coast through Prince William Sound, Alaska.

Natives in Alaska and British Columbia used Alaska Yellow Cedar in much the same way as more southern tribes used Western Red Cedar. The preparation of the Alaska Cedar bark was more time-consuming because it had to be soaked and boiled to remove the pitch. But, because of its softness, it was often preferred over Western Red Cedar bark for weaving blankets, robes, and capes. The wood was used to make many tools and containers, but it was especially popular for making bows. Alaska Cedar is not logged much anymore in Washington but is still being cut in British Columbia and Alaska. The wood is highly prized by the Japanese for use in temples because of its similarity to their sacred Hinoki False Cypress, Chamaecyparis obtusa.

There is some variability in the growth habit of Alaska Cedar. Some trees may have flattened branches that droop or “weep” more than others. The cultivated variety, ‘Pendula,’ has a very distinct narrow, weeping form.  Alaska Cedar is a very popular landscape tree. Because of its narrow form and slow growth it can be grown successfully near commercial buildings. Its attractive, weeping habit makes it sought after to provide a focal point for formal landscape gardens.