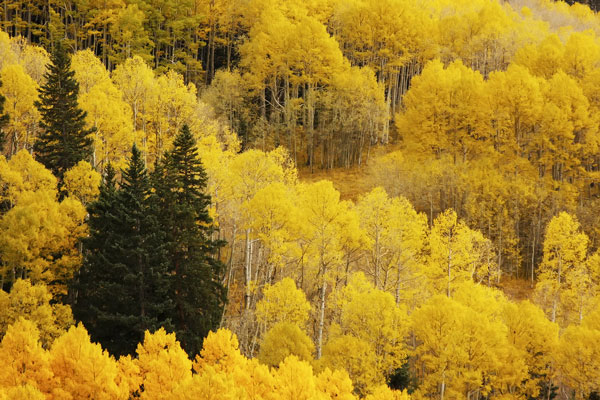 General: Willow Family (Salicaceae): This is a native tree 5-30 m high, typically less than 15 m, with a rounded crown; lateral roots may extend over 30 meters and vertical sinker roots from the laterals may extend downward for nearly 3 m; bark typically smooth, greenish-white to gray-white, often thin and peeling, becoming thicker and furrowed with age, especially toward the base. Leaves simple, deciduous, broadly ovate to nearly round, 4–6 cm long, with small, rounded teeth on the margins, on a slender, flattened petiole, dark green and shiny above, pale green below, turning bright yellow, yellow-orange, gold, or reddish after the first frosts. The male (staminate) and female (pistillate) flowers are on separate trees (the species dioecious – or ‘polygamodioecious,’ because bisexual flowers may be produced at low frequencies on staminate and pistillate trees), each type of flower borne in pendent catkins. The fruits are narrowly ovoid to flask- shaped capsules 5-7 mm long, splitting to release the seeds; seeds ca.2 mm long, each with a tuft of long, white, silky hairs, easily blown by the wind. The common name is in raking of the leaves in light wind. 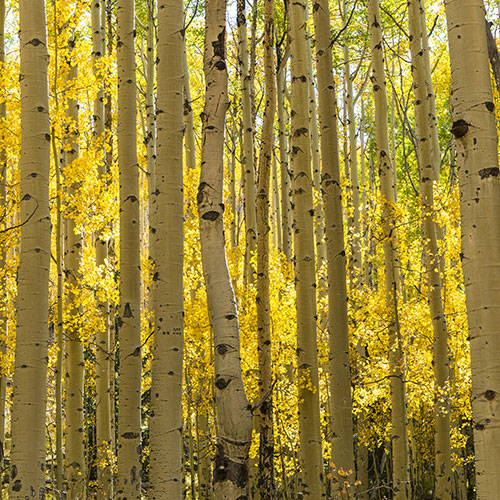 Nearly round, pointed at tip and rounded at base, edged with many small rounded teeth;

Capsules on 3 to 4 inch-long catkins;

Propagates from root sprouting after disturbance;

Throughout interior and southcentral Alaska, across Canada and south to New Mexico;

Widest distribution of any native tree in North America.

Conservation: Quaking aspen is valued for its white bark and brilliant fall color, especially when clustered. The species been widely used in landscaping but is best in sites away from structures that might be damaged by the aggressive roots. The trees provide good visual screening and noise abatement.

Aspen stands are good firebreaks, often dropping crown fires in conifer stands to the ground when they reach aspens and even sometimes extinguishing the fire because of the small amount of flammable accumulation. They allow more ground water recharge than do conifer forests and they also play a significant role in protecting against soil erosion. They have been used in restoration of riparian habitats.

Wildlife: Young quaking aspen provides food and habitat for a variety of wildlife: black bear, deer, beaver, porcupine, elk, moose, ruffed grouse and many smaller birds and animals, including small mammals such as mice, voles, shrews, chipmunks, and rabbits. Bark, buds, new sprouts, twigs from the tops of fallen or logged trees, and fallen leaves all are wildlife foods.

Ethnobotanic: Native Americans used Populus bark (including aspen) as a food source. They cut the inner bark into strips, dried and ground it into meal to be mixed with other starches for bread or mush. Catkins were eaten raw, and the cambium was eaten raw or in a soup.

Industry: Quaking aspen is an important fiber source, especially for pulp, flake-board, and other composite products. The wood is light and soft with little shrinkage (see Wheeler 2000) and is used for pallets, boxes, veneer, and plywood. Higher grades are used for other solid wood products, such as paneling, furniture components, and flooring. The wood characteristics make it useful in miscellaneous products, including excelsior, animal bedding, matchsticks, toys, beehives, tongue depressors, spoons, and ice cream sticks. It makes good playground structures because the surface does not splinter, although the wood warps and susceptible to decay.

Quaking aspen occurs in a wide variety of habitats (including soil type and moisture conditions) and at a great range of elevation, matching its extensive geographic range. It characteristically forms pure stands or mixed stands with bigtooth aspen, but it occurs with scrub oaks and sagebrush at lower elevations and as a prostrate form above timberline and exists as a dominant species in many communities at mid elevations. It is a shade- intolerant, disturbed site species and is quickly replaced in succession by more tolerant species.

Some trees are self-pruning, dropping numerous small twigs with excess fall foliage and returning nutrients to the soil. Leaves decay relatively rapidly, and a characteristic “”aspen soil,”” with a higher pH than on conifer-dominated soils, develops on sites that have supported aspen for a number of generations.

Flowering occurs March–April (East) or May–June (West), before the leaves appear and fruiting in May– June (–July), often before the leaves are fully expanded. Temperatures above 12° C for about 6 days apparently trigger flowering. Female trees generally flower and leaf out before male trees.