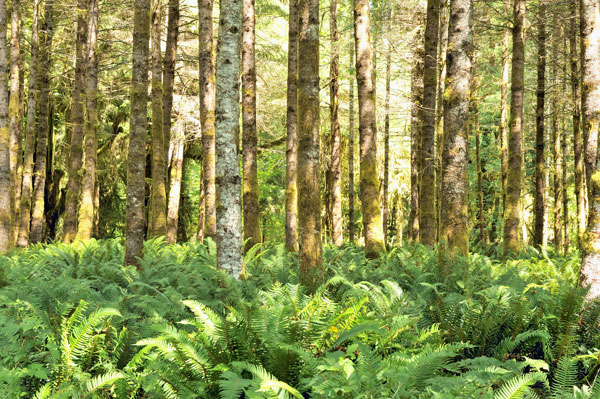 General: Birch family (Betulaceae). Red alder is a deciduous tree native to the Pacific Northwest of North America. The trees are medium-sized, reaching various heights from 15 to 30 meters tall when mature. These fast-growing trees often grow 1 meter per year until 20 years of age. The trees can live to 100 years of age with trunks from 36 to 46 cm in diameter. A shrub form occurs when the trees grow in open exposed areas. The branches are slender and spreading. The thin bark is generally smooth, ashy gray to grayish-brown, and is usually covered with white lichens as it ages. The inner bark is reddish brown.

Propagation from Seed: Red alder trees are generally propagated from seed. Mature seeds can be collected beginning in May. Spring sown seeds of Alnus rubra should germinate successfully as long as they are not covered as the seeds require sunlight to germinate and germinate best in full sun. Sow the seeds in containers or seed trays containing a slow release fertilizer. Firm the medium and place the seeds thinly and evenly on top. When large enough to handle, the seedlings can be placed into individual pots. If growth is sufficient, they may be planted into their permanent positions in the summer, if not they can be planted the following spring.

The seeds do not require pretreatment, however germination can be improved by cold stratification for 1 to 3 months (Emery 1988). To do this, mix the seeds with three parts moistened peat moss or vermiculite. Place the mixture into an airtight jar or sealed plastic bag in the refrigerator for 1 to 3 months before planting. This process is not necessary if the seeds are planted in the fall, as the temperatures and moisture over winter will accomplish the same purpose.

Often appearing white due to incrustation by pale, flat lichens.

Most common hardwood on the Pacific coastline;

From mid-California to Yakutat, Alaska.

Ethnobotanic: Native American tribes from Alaska to Southern California have long recognized the value of red alder and put its bark layers, roots, leaves, twigs, cones, and sap to use for a variety of purposes. The inner bark was often dried, grounded into a powder and then used as a thickener in soups or mixed with cereals when making bread.

Various layers of the red alder bark yield red, red-brown, brown, orange, and yellow dyes (Moerman1998). The various colors from the bark were used to color baskets, hides, moccasins, quills, and hair. The native Americans of the Pacific Northwest extracted a red dye from the inner bark, which was used to dye fishnets. Oregon tribes used the innerbark to make a reddish-brown dye for basket decorations (Murphey 1959). Yellow dye made from red alder catkins was used to color quills.

A mixture of red alder sap and charcoal was used by the Cree and Woodland tribes for sealing seams in canoes and as a softener for bending boards for toboggans (Moerman 1998).

Wood and fiber: Red alder wood is used in the production of wooden products such as food dishes, furniture, sashes, doors, millwork, cabinets, paneling and brush handles. It is also used in fiber-based products such as tissue and writing paper.

In Washington and Oregon, it was largely used for smoking salmon. The Indians of Alaska used the hallowed trunks for canoes (Sargent 1933).

Medicinal: The North American Indians used the bark to treat many complaints such a headaches, rheumatic pains, internal injuries, and diarrhea (Moerman 1998).

The Salinan used an extract of the bark of alder trees to treat cholera, stomach cramps, and stomachaches (Heinsen 1972). The extract was made with 20 parts water to 1 part fresh or aged bark. The bark contains salicin, a chemical similar to aspirin (Uchytil 1989).

Infusions made from the bark of red alders were taken to treat anemia, colds, congestion, and to relieve pain. Bark infusions were taken as a laxative and to regulate menstruation. The Pomo boiled the bark in water to make a wash to treat skin irritations and sores (Goodrich et al. 1980). Bark poultices were applied to reduce swelling. Chewing the bark helped to heal sores and ulcers in the mouth.

Externally the sap was applied to cuts and a poultice of the bark has been applied to eczema, sores, and aches (Moerman 1998). The twigs were made into infusions that served as liniments for sprains and backaches.

Wildlife: Deer and elk eat the leaves, twigs, and buds. Red alder seeds attract many bird and small mammal species including redpolls, siskins, goldfinches, and mice. Most of the seeds remain on the tree well into the fall and winter months, providing valuable resources for seed-eating birds, insects and mammals when other foods are scarce. Beavers eat the bark and build dams and lodges with the stems. Red alder trees provide valuable nesting for birds and thermal cover for black-tailed deer and other wildlife.

Conservation and erosion control: Red alder is an excellent species for re-establishing woodlands. The trees are used in forested riparian buffers to help reduce stream bank erosion, protect water quality, and enhance aquatic environments. Plantings of red alder are effective in controlling erosion on steep slopes in disturbed areas (Uchytil 1989). These fast-growing trees help to prevent soil erosion because of their dense canopy cover and thick litter layer that forms within the first 3 to 5 years. The leaf litter is high in nitrogen content (Labadie 1978).

Wood: Red alder wood is a high quality hardwood with a fine, even textured, cherry-like grain that is important commercially in the Pacific Northwest (Labadie 1978). It is used for cabinetry and furniture making as well as a variety of other purposes including plywood, veneers, paneling, pulp, and firewood.