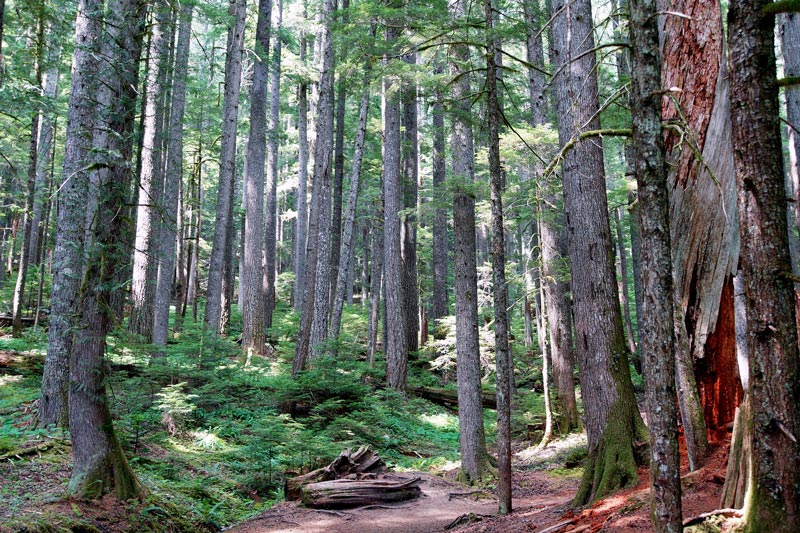 General: Western hemlock (Tsuga heterophylla) is a large evergreen tree growing from ninety to two-hundred feet high. The needles are short stalked, flat, finely toothed, irregularly spare, and of unequal length (five to twenty millimeters long). The seed cones are ovoid, short-stalked, brown, with many thin papery scales, stalkless, and hanging down at the end

of the twigs. The bark is smooth when young, reddish-brown, becoming darker, and deeply furrowed with flat-topped scaly ridges (Farrar 1995).

Seedling transplant well when they are 8 to 36 inches tall. However, the best survival rate can be achieved if seedling are transplanted between 8 and 20 inches, this is usually when they are about five to eight years old (Huxley 1992). Transplanting larger seedlings will check badly and hardly put on any growth for several years. This slow growth predisposes the seedling to pest, poor root development and wind throws, and related damage. (Ibid.).

Light- to medium-green on top, with two whitish parallel lines beneath, needles are unequal in length from 1/4 to 7/8 inch long;

Blunt-tipped, soft, shiny, and flat, generally growing from two sides of branch parallel to the ground.

Scaly when young, becoming thick and furrowed with age.

Along Coast Range in central California to the Kenai Peninsula of Alaska.

Ethnobotanic: Western hemlock bark has high tannin content and was used as a tanning agent, pigment and cleansing solution (Pojar & MacKinnon 1994). Some Coast Salish people used a red dye made from hemlock bark to color mountain goat wool and basket materials and as a facial cosmetic and hair remover (Ibid.). The wood was heavy, durable, and fairly easy to carve. Implements such as children’s bows, spoons, combs, roasting pits, dip-net poles, and edges were carved from hemlock wood. The Mainland Comox threaded oolichan and herring boughs for drying, and used for drying, and used the boughs for lining steaming pits (Ibid.). Kwakwaka’wakw dancers wore headdresses, and head-bands of hemlock boughs, and young women lived in hemlock-bough huts for four days after their first menstruation (Ibid.).

Pitch obtained from crevices in the bark, has been chewed as a gum (Ibid.). Western hemlock leaves and shoot tips were used to make an herbal tea. The leaves and young shoots have been chewed as an emergency food to keep one alive when lost in the woods (Ibid.).

Medicinal: Western hemlock was commonly employed medicinally by several native North American Indian tribes who used it to treat a variety of complaints (Moerman 1998). Hemlock pitch was applied for a variety of purposes, including poultices or poultice coverings, linaments rubbed on the chest for colds and when mixed with deer tallow as a salve to prevent sunburn (Pojar & MacKinnon 1994). A decoction of the pounded bark has been used in the treatment of hemorrhages, diaphoretic, and diuretic (Moerman 1998). The powdered bark can be put in shoes for foot odor.

Landscaping & Wildlife: Tsuga heterophylla is occasionally planted as an ornamental tree in northern states and in Western Europe (Sargent 1961). Western hemlock stands provide cover and habitat for many wildlife species and small mammals. It is also used for nest trees by cavity nesting birds. This species is browsed by elk and deer. The seedlings are eaten by snowshoe hares and rabbits.

Economic: It is one of the best pulpwood for paper and paperboard products. The wood is used in house construction for external walls, structural support and is suited for interior finish, kitchen cabinets, flooring, and ceiling. 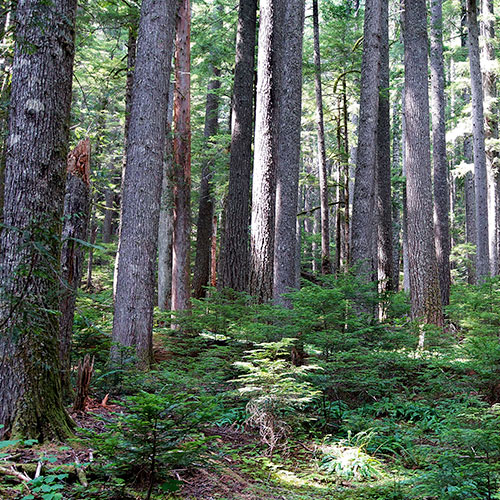