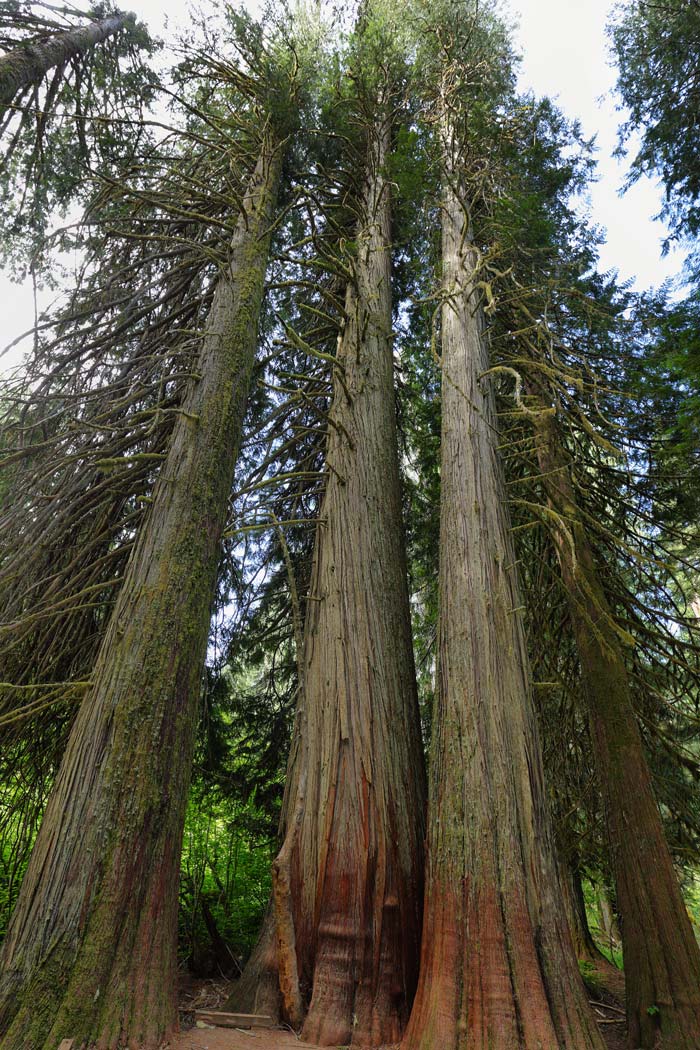 General: Cypress family (Cupressaceae). Native trees growing to 50 (-75) meters tall, often buttressed at base, with a conical to irregular crown, old individuals frequently with many leaders and many dead spike tops; branches arching, branchlets pendent, flattened, in fan-shaped sprays; bark gray to reddish-brown, 10-25 mm thick, fibrous, separated into flat, connected ridges. Leaves are evergreen, scale-like and sharply pointed, (1-) 3-6 mm long, opposite in alternating pairs (in 4 rows), glossy green above, white-striped on the lower surface, with a spicy fragrance when crushed. Seed cones are ellipsoid, 10-14 mm long, brown; seeds 8-14 per cone, 4-7.5 mm long, with lateral wings about as wide as the body. The common name pertains to the western distribution and cedar-like appearance.

In mixed-species and uneven-aged stands, western red cedars tolerate shady understory conditions and can maintain slow but acceptable growth rates over long periods. In timber harvest of these mixed-species stands, most of these trees are taken by clearcutting. Because of steep terrain, decay, and breakage, harvesting costs are high and lumber recovery is low. Because of its high susceptibility to windthrow in wet environments and in the moist sites where growth and yield are highest, western red cedars should not be left as scattered seed trees. Even those along clearcut margins may be lost to wind throw or exposure.

Severe browse damage to western red-cedar seedlings and saplings by deer, elk, and rodents may be the most important problem in the establishment of young stands. In near-coastal sites, western red-cedar is more severely damaged by fire than any of its associates.

Springy, fan-shaped sprays of branches, turning up at ends;

Clustered near end of branches;

70 to 100 feet in height in Southeast Alaska (growing much taller in southern part of range) and 2 to 4 feet in diameter (occasionally reaching 6 feet);

Sea level to 500 feet in elevation; 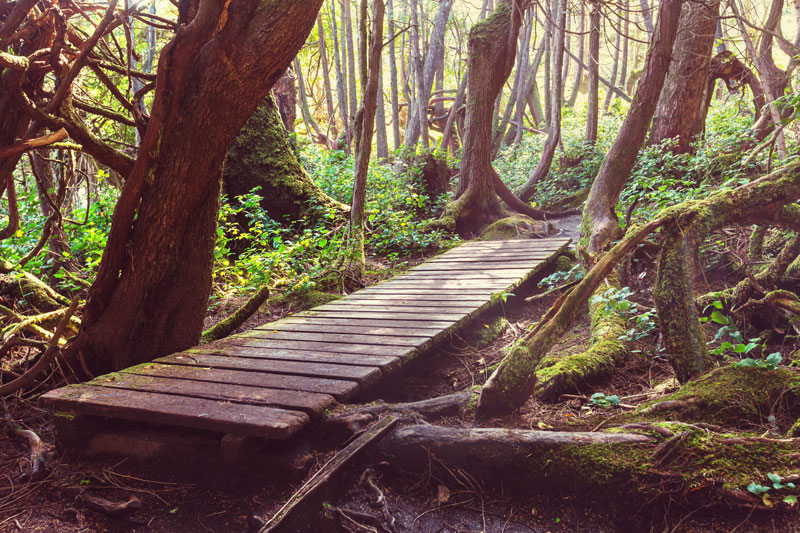 Industry: The wood of western red cedar is primarily used in roofing for shingles and shakes, because of its attractive appearance, durability, lightness, and superior insulation qualities. It is also used in exterior finishings, utility poles, fence posts, piling, paper pulp, and various types of containers. The species is managed for timber in Europe and New Zealand. Cedar leaf oil is often the basis for production of perfumes, insecticides, medicinal preparations, veterinary soaps, shoe polishes, and deodorants.

Wildlife: The leaves of western red cedar are a major winter food for big game in the northern Rocky Mountains, and deer browse it all year along the coast. Many cultivars are grown for ornament, including those used for hedges. It is the provincial tree of British Columbia.

Ethnobotanic: Western red cedar has been called “the cornerstone of northwest coast Indian culture” and the large-scale use of its wood and bark delineates the cultural boundary of the northwest coast peoples within its range. Wood served for house planks, house posts, roof boards, various kinds of boxes, and canoes. It is easy to split and was often used for bentwood boxes. Bark was made into skirts, capes, and complete dresses for women, and roots and limbs were used for baskets and rope. The inner bark was used for slow matches to carry the fire from camp to camp, and also as mats, and baskets. Various medicines were derived from the tree.